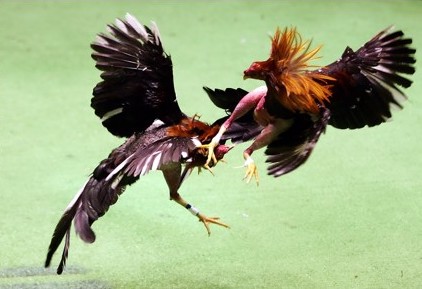 Subtle and straightforward efforts to thwart protections for wolves, Walking horses, and roosters

There has been unmistakable progress in the field of animal protection, especially in recent years. We’ve outlawed cockfighting and dogfighting and made it a felony at the federal level too. The veal industry no longer immobilizes male calves as a standard husbandry practice. Researchers no longer use chimpanzees in invasive experiments in labs. Dozens of airlines won’t carry trophies of elephants, lions, and other Africa Big Five species. Hundreds of cosmetic companies proudly market their products with a “no animal testing” markings.

But with reform, there come reprisals. I wrote recently about the raft of maneuvers to stifle progress against factory farming in the form of ag-gag measures, right to farm amendments, federal preemption efforts, and others.

It’s not just in the realm of industrialized agriculture. On other reform fronts, there are the outright efforts to directly reverse the progress we’ve made, or to sidetrack reform efforts in progress.

Repeated volleys to eliminate federal protection for wolvesToday, the Department of the Interior announced its intention to remove federal Endangered Species Act (ESA) protections for wolves across their entire range in the lower 48 states. This comes after Animal Wellness Action and an array of other animal welfare and conservation groups, working with our allies in Congress, stymied legislative efforts in 2018 to eliminate federal protections for wolves in the Great Lakes region and in other parts of the U.S.

With the Democrats taking the House, and noted pro-ESA, pro-wolf legislators now occupying key roles that enable them to prevent the movement of similar legislative attacks on wolves and the Endangered Species Act in 2019 and 2020, we’ve now seen the anti-wolf forces choose an alternate channel: executive agency delisting.

This isn’t the first time that Interior officials have tried this strategy. This effort has been turned back in the federal courts time and again, but each time, they refine their efforts in order to try to comply with the law. We and other similarly-minded organizations will look to fight them in the courts to stop this political assault on a slowly recovering species. But it is sure to be a tough fight, and by no means are wolves safe in the lower 48 states where just about 5,000 of them survive.  If we cannot stop them, then the mass killing of wolves will resume in more than half a dozen states where ranchers, trophy hunters, and trappers are itching to kill.

U.S. Representative Scott DesJarlais, R-Tenn., just two weeks ago, introduced legislation related to the treatment of Tennessee Walking horses that has the patina of a legislative reform effort within an industry that’s been abusing horses for more than half a century. But it’s anything but that. DesJarlais and a handful of lawmakers from that part of the country have been shilling for a powerful group of trainers and owners who abuse horses in order to game the odds at horse shows.  It’s called “soring,” and trainers do it by burning chemicals into the skin of horses or driving nails or other foreign objects into the sensitive portion of tissue above their hoof and then putting large stacked shoes  and ankle chains on their feet to cause them such pain and distress that they exaggerate their natural gait. The exaggerated gait is called the “Big Lick” and it is perhaps the most egregious example of abuse in the horse show world in the United States.

Reps. Kurt Schrader, D-Oregon, and Ted Yoho, R-Fla., have a bill that promises to bring real reform to the industry. Their bill, H.R. 693, the Prevent All Soring Tactics (PAST) Act, will ban the use of stacks and chains, eliminate an industry self-regulation program, and to impose substantial penalties on violators.  Senators Mike Crapo, R-Idaho, and Mark Warner, D-Virg., are readying a companion bill in the Senate for reintroduction.

The DesJarlais bill was drafted in concert with “Big Lick” enthusiasts and amounts to a diversion to slow down the progress of the PAST Act.  We’ll do our best to show lawmakers what real reform looks like, and also how DesJarlais’ bill is just a dolled-up version of the status quo.

Political leaders in Puerto Rico and other U.S. territories rush in to defend cockfightingJust two months after President Trump signed a farm bill that included a broadly supported provision strengthening federal laws against dogfighting and cockfighting, Puerto Rico’s Delegate Commissioner has introduced H.R. 1189 in the U.S. House to repeal the provision.

As I wrote last week in the Orlando Sentinel, our nation should treat the recently adopted animal fighting legislation as a celebratory moment as we close an ugly chapter in our nation’s treatment of animals. Animal fighting spectacles should be placed in the same category as dueling, foot-binding, bestiality, and other ages-old forms of exploitation.

Instead, the five lawmakers from the territories cosponsored this legislation to repeal the law on animal fighting, even though every state in the U.S. forbids the practice and Congressional support for outlawing these practices everywhere in the U.S. is overwhelming.

Territories and states shouldn’t be able to opt out of federal laws they don’t like. It’s certainly within their rights to urge lawmakers to introduce legislation to change the law. But that strategy, in this case, just doesn’t make sense given the national clarity we have forged when it comes to animal fighting spectacles. The law against animal fighting applies to every person of every color, ethnic background, and in every part of our very diverse United States.

Our work for animal protection is never done, and the battles against the trophy hunting and trapping of wolves, the soring of Walking horses, and cockfighting in the U.S. territories are present-day reminders that we cannot relent or lose our focus in our efforts to protect all animals from cruelty.