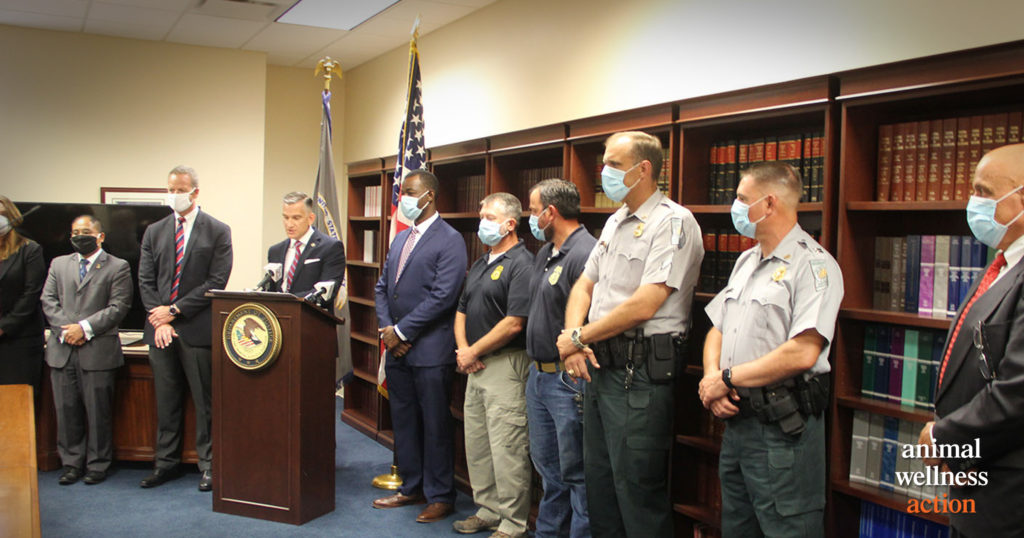 Enforcing Animal Protection Laws As Important as Enacting Them

Reports from China this week are delivering a dose of heartbreak and how-can-it-happen. Dog meat traders are butchering terrified and terrorized dogs at the infamous Yulin festival, selling their parts to buyers in defiance of a new Chinese regulation that reclassified dogs from “livestock” to “pets” and made selling dog meat illegal.

With millions of dogs put on the cutting blocks or boards at the festivals and other commercial-sales enterprises, the announcement just weeks ago that the dog meat trade would end in the world’s biggest nation was one of the truly celebratory moments in the contemporary animal protection movement.

But, as with many laws, enactment doesn’t always translate into perfect adherence.

Cruelty and its perpetrators are stubborn.

Take the case of the wet markets that sell live wildlife for consumption — which, as with dog meat, is a multi-billion-dollar enterprise with both business operators and consumers fueling supply and demand. China pledged to stop the live wildlife trade for consumption in 2003 after the SARS epidemic, acknowledging that wet markets are mixing bowls of blood and other animal fluids and potential incubators of zoonotic diseases. After the media furor waned about that global disease, China’s leaders reneged. They allowed the trade to resume, and government leaders even encouraged industry growth, which as of last year exceed $70 billion in annual revenues. In the wake of the wet-market-borne COVID-19 crisis — which upended the world’s economy and left hundreds of thousands dead and millions infected — China’s policy leaders are speaking with more assertiveness that the trade will halt. Indeed, press reports indicate that many vendors, since the COVID-19 crisis, have stopped selling wild animals for human consumption.

But as with dog meat, obedience to the new legal proscriptions is far from uniform.

We’d be naïve to think the fight over the dog meat trade or live wildlife sales for human consumption is complete. Dismantling these industries for good will require our ongoing investigations, persuasion, press exposure, and our relentless argument grounded on humane concerns and public health and safety.

And it’s not just in China.  This is a struggle wherever animal advocates are successful in enacting legislation and the problem is particularly acute in the United States. Implementation and enforcement aren’t easy, especially when people profit from exploitation and have developed deeply held rationalizations to justify their conduct.

We see this with law enforcement by the U.S. Department of Agriculture of our regulations governing puppy mills or the treatment of animals in laboratories.

Nike, Puma, and other shoe companies are openly defying a California law that forbids sale of athletic shoes made from kangaroo skins, even though we’ve reported the violations to companies that should know better when it comes to compliance.

Yesterday, federal authorities raided a major cockfight in southern Georgia.  They arrested 175 spectators at these gladiator-style fights.  They seized 800 roosters before the inevitable injury and death that would come from placement in a pit, with knives attached to their legs.

With a strong law that enables this work, the federal government has stepped up its raids of cockfighting and dogfighting operations.

But the pace of enforcement isn’t commensurate with the scale of the crimes. These are massive industries, with the cockfighters, in particular, openly defying the law.

Animal Wellness Action and the Animal Wellness Foundation have launched a major enforcement campaign – “Animal Fighting Is the Pits” – to eradicate animal fighting in the United States.  We launched the enforcement phase of the campaign after succeeding in enacting a law that took effect in December 2019 to ban animal fighting in the U.S. territories, including Guam.

I snuck into the Dome in the north of Guam for a late-night cockfighting derby just three months before the federal law took effect to ban animal fighting in this hotbed of the practice.  Since then, the Dome has been shuttered and the governor of Guam — herself a cockfighting booster — reluctantly told the territory’s 17 village mayors that cockfights would no longer be sanctioned at their annual festivals. The territory’s Cockfighting Licensing Board has disbanded.  Polling we authorized showed that more that more than 60 percent of Guamanians want the cockfighters stopped and the federal law enforced.

Yet we still hear about people breaking the law. Every day we are watching and assembling information to promote enforcement.  There are people willing to risk their freedom to enjoy the spectacle of watching animals kill each other.

During our campaign, we obtained live-animal import records from the Guam Department of Agriculture revealing that cockfighters there imported 8,800 fighting birds from state-side cockfighters over the prior three-year period. These records detailed more than 500 illegal shipments by 71 individuals from more than a dozen states that helped replace the birds killed in knife fights.

In short, the Guam data led us, in a circuitous way, to the cockfighting mafia in the U.S.

Organized criminal cockfighters from Oklahoma, California, Hawaii, North Carolina, and Alabama were the top shippers of fighting fowl. And we knew Guam was probably just one of many destinations for U.S.-bred fighting fowl.  These breeders are shipping fight animals all over the world, including to Mexico and the Philippines.

Federal, state, and local law enforcement have a duty to enforce the law.  That’s what our campaign is about, and why we are pushing for officials to take aim animal abusers.

To that end, and also to enforce other federal anti-cruelty laws, we are asking Congress to create an Animal Cruelty Crimes section at the U.S. Department of Justice.

Congress has passed a number of federal criminal anti-cruelty laws, including the Preventing Animal Cruelty and Torture Act in November 2019, expressing the collective approval of U.S. lawmakers to address animal cruelty and other anti-social behavior often intertwined with it. A dedicated Animal Cruelty Crimes section at DOJ would allow for robust and effective enforcement of these crimes by designating personnel focused on these issues. DOJ already has dedicated sections on other important societal concerns, such as environmental protection and organized crime. It’s time to establish a dedicated section on animal cruelty.

We humans have demonstrated an ability to wipe out entire species and to perpetrate merciless acts of cruelty on innocent creatures. That’s precisely why the law must speak. It must shield animals from the worst among our species.

This is a major task for our movement.  But, in the era of broad acceptance of our ideals, it is among the most important and urgent things we must do as a cause.

ACT NOW to sign our petition to tell Attorney General Barr to enforce the law that forbids the trafficking of fighting animals from the U.S. to foreign countries