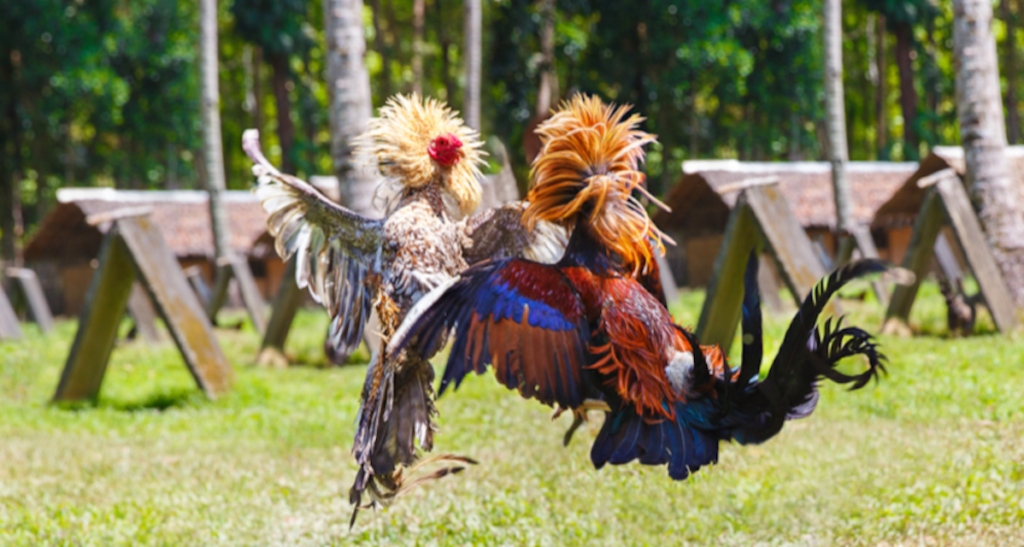 Last fall, Animal Wellness Action launched a campaign to banish cockfighting in the territories, the last semi-legal outposts allowing staged fights in the nation. Puerto Rico had more than 100 fighting arenas. Guam had bustling venues, too, including “The Dome,” where I had a ringside seat at a cockfight in late September 2019.

Three months after witnessing those gruesome matches one late night on Guam, the federal law banning animal fighting throughout the entirety of the United States took effect.  The Dome shut down, and the governor of Guam — herself a cockfighting booster — reluctantly told the territory’s 17 village mayors that cockfights would no longer be sanctioned at their annual festivals. Polling we authorized should have given comfort to the Governor and other nervous politicians: 60 percent of Guamanians supported the federal law banning cockfights on the island.

During our campaign, we obtained live-animal import records from the Guam Department of Agriculture. This proved to be a deep vein of anti-cockfighting ore, with our mining of the data revealing that Guam-based cockfighters imported 8,800 fighting birds from state-side cockfighters. These records detailed more than 500 illegal shipments by 71 individuals from more than a dozen states that helped replace the birds killed in knife fights.

In short, the Guam data led us, in a circuitous way, to the cockfighting mafia in the U.S.

Clans of cockfighters from Oklahoma, California, Hawaii, North Carolina, and Alabama were the top shippers of fowl for fighting. And we knew Guam was probably just one of many destinations for U.S.-bred fighting fowl.

Two weeks ago, we exposed the thriving underworld of Oklahoma cockfighting. Based on a supplementary investigation, we determined Oklahoma is almost certainly the nation’s cockfighting capital, with major operators raising birds for sale throughout the world.  Now we are demanding that U.S. Attorneys there dismantle these criminal enterprises.

We followed up by conducting a press conference this week exposing the illegal fighting industry in Alabama, which rivals Oklahoma in scale and scope.  The cockfighting syndicates there often operate on dozens of acres, with the cockers raising and selling thousands of birds annually, destined for the fighting pits of Mexico, Vietnam, the Philippines and cockfighting strongholds, in direct violation of the federal law forbidding interstate transport or export of any fighting animal.

The three biggest Alabama shippers to Guam come from the same tiny town of Nauvoo, Ala. One of the three shippers, Jerry Adkins of Slick Lizard Farms, recently told a Filipino television broadcaster that he sells 6,000 birds a year. With some birds fetching as much as $500 each, that could generate as much as $3 million in gross sales. For Adkins and his son, Guam has been but a minor market compared to Mexico, where they sold 700 birds to a single purchaser in just one year. (Meet the Adkins and learn about their operation here and here.)

Though our investigations have determined the United States is the literal breeding ground for the global cockfighting industry, breeders here continue to tell outsiders they are not involved in the blood sport.  Yet quizzically, their interviews in marketing videos describe certain birds as “the deepest cutters” and how others “slash from above.” And it’s a weird coincidence that the “Thunderbird U.S. Gamefowl Tour,” celebrating all things cockfighting, shows Filipino broadcasters touring dozens of United States farms. (Cockfighting is legal in the Philippines.)

At our press conference, Jonathan Buttram, president of the Alabama Contract Poultry Growers’ Association (star of the movie “Supersize Me 2: Holy Chicken”), has his own concerns about cockfighters flanking his poultry farm: the gamefowl guys spreading avian influenza. “Cockfighters ship birds very long distances, and engage in very intimate contact with the birds, sometimes sucking fluids from the air passages of the birds in order to keep an injured bird fighting,” noted Buttram. “The shipments and the fighting birds would allow an avian disease to spread far and wide very fast and potentially to spread to humans. This kind of twisted entertainment does not warrant the disease risks.”

Our investigations in Oklahoma and Alabama reveal that cockfighters in these states are running their illegal operations in full view of law enforcement. At least in Alabama, they seem to have supreme confidence, and for good reason, that they are safe from the interventions of local police. Alabama has not upgraded its anti-cockfighting law since 1896. While dogfighting is a felony in the Yellowhammer State, cockfighting penalties are similar to parking tickets with a maximum fine of $50 and no jail time.

But their legal risks are a whole different matter when it comes to federal law. The Animal Welfare Act has a set of sweeping anti-fighting provisions, and the penalties are dead serious: up to $250,000 in fines and five years in prison, per violation.  If authorities prosecuted Mr. Adkins on separate counts for each of his 6,000 birds, he could, in theory, be sentenced to 30,000 years in prison. I suspect a couple years in the joint would do the job and signal to other cockfighting traffickers that this is truly a risky business.

While state lawmakers dither, it’s time for federal law enforcement agents to act. Time for them to move against the biggest underground animal cruelty industry in the United States.

Forget about catching the perps while they’re in the act of fighting their birds. Just stop them from raising thousands of birds and shipping them all over the world.  The federal law was built around forbidding that very activity.

To take action, they don’t need undercover operatives.  Look at our investigative report and do a quick drone flight over these extensive operations.

That should be fine. With a warrant in hand, they can just waltz in and ask why they have so many beautiful birds and what they’re planning to do with them.