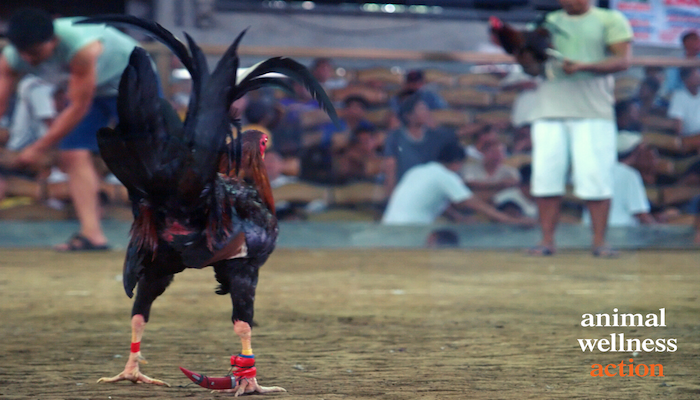 It is rare moment when a nation enacts wholesale prohibitions upon a widespread, lucrative form of animal exploitation. Today, after decades of campaigning to deliver that outcome, I’m pleased to report the enterprise of cockfighting – an ages-old form of staged animal combat that held on as a semi-legal activity in a handful of enclaves – is a felony offense everywhere in the United States.

Legal closure occurred last week when the U.S. Supreme Court declined to take up an appeal brought forward by Puerto Rican cockfighters. The Supreme Court’s action lets prior federal court rulings stand and the law can now be declared settled and final.

“Neither the Commonwealth’s political status, nor the Territorial Clause, impede the United States Government from enacting laws that apply to all citizens of this Nation alike, whether as a state or territory,” wrote Judge Gustavo Gelpí in siding with the United States in an October 2019 federal District Court ruling brought by Club Gallistico and other fight venue operators that challenged the newest provisions of the anti-fighting law. And in early 2020, Federal Appeals Court Judge Sandra L. Lynch, on behalf of a panel for the court, wrote that the U.S. law against cockfighting “is a valid exercise of Congress’s Commerce Clause power and does not violate plaintiffs’ individual rights.”

In short, the courts affirmed that Congress acted properly when it decided in 2018 to apply all prohibitions against cockfighting to all parts of the United States, including the territories. When it enacted the law, the Congress gave the territories one year to get cockfighting out of its system. Snubbing the good faith of Congress, our investigations revealed many cockfighters there kept on with their bloody hobby and business, while also hoping for relief from the federal courts.

When the national ban on cockfighting went into full effect in 2019, Puerto Rico may have had as many as 100 cockfighting pits.  Guam had one major fighting arena, which I visited in 2019, along with regular fights in the villages on the small, western Pacific island.

Culture is no defense for cruelty

Though the enterprise generates billions of dollars in economic activity in the U.S. – mainly through the wagering and entry fees at cockfights, and also the sale of the fighting animals – its major argument in its self-defense has been to invoke “cultural prerogative.”

This is a smokescreen, and it’s always been one.

When people of diverse and disparate ethnic heritages each lay claim to cockfighting as a cultural right, it dilutes the argument leaving the claim of cultural significance with little substance or relevance.

The reality is, cockfighting probably started 3,000 years ago during the Roman era and spread as the empire expanded. It’s been practiced throughout much of the world, with the legal enclaves shrinking in number and with opposition to the practice solidifying everywhere.

In some ways, it stood the test of time. Yet, there were plenty of other moral horrors that were long a part of the human experience; dogfighting, bullfighting, bear-baiting.

Civil behavior typically triumphs over cruelty. In this case, it took time, but the law finally caught up with mainstream thinking in the U.S., including on Guam and Puerto Rico.

Since that law went into effect, we’ve been working to enforce our federal and state laws against staged fights, and to defend them from rapid-fire legal challenges by cockfighters.

Our investigations have collectively revealed that the United States has become the breeding ground for the global industry, with cockfighters raising hundreds of thousands of animals for fighting and then shipping them to other cockfighters for final acts in fighting pits and arenas across the globe.

There are also plenty of fighting arenas in the United States – not just the pits in Puerto Rico and Guam, but also in Alabama, California, Kentucky, Georgia, New Mexico, Tennessee, and other states. In short, animal fighting is happening here in the homeland, in underground and even above-ground venues.

With Congress’s clear intent to ban the practices, and with the federal courts affirming that authority, it’s now up to the executive branch to enforce the law.

The laws ban a wide range of practices associated with cockfighting. The feds don’t need to break up fights in progress; they can take action against cockfighting traffickers who raise hundreds or even thousands of fighting animals at their gamecock farms and sell them inside and outside the country, mostly by means of online marketing and videos.

The Commonwealth of Puerto Rico and Guam, as legal jurisdictions of the United States, cannot whimsically opt-out of U.S. laws that forbid animal cruelty. Congress and the federal courts have determined that cockfighting is not only barbaric and inhumane, but it is bound up with interstate commerce, grounding the authority of the federal government to forbid staged fights that leave animals with punctured lungs, gouged eyes, and other grievous injuries.

In January 2020, soon after taking office, Governor Pedro Pierluisi of Puerto Rico expressed support for the continuation of cockfighting on the island. Pierluisi stated that he is “committed to supporting an industry that generates jobs and income for our economy, that represents our culture and our history.”  He declared that he and Jennifer Gonzalez Colon, the Puerto Rico’s Resident Commissioner in Congress, “will continue to fight for them.” He and his predecessor, Wanda Vázquez Garced, have said, without legal authority, that cockfighting may continue so long as animals are not imported for the purpose.

At that time, perhaps Pierluisia and Gonzalez-Colon held out hope that the cockfighting clubs might prevail in an appeals court or even before the Supreme Court. But now, with the U.S. Supreme Court slamming the door shut on their trumped-up legal claims, it’s time for them to recognize the legal realities.

In assuming office, Pierluisia and Puerto’s representative in Congress took an oath to uphold the laws of the United States. That time has come in the matter of cockfighting.

The federal law against dogfighting and cockfighting never singled out Puerto Rico, Guam, or any other U.S. territory. The federal law, step by step, applied prohibitions to cockfighting in the territories, and finally in 2018, the Congress finished the job in banning the practice on every acre of U.S. soil.

There is a debate about future statehood for Puerto Rico. But no matter how that debate is resolved, it ought not obscure the jurisdiction’s existing legal relationship to the United States: it is a territory, deriving a range of benefits from its territorial status and obligating it to abide by federal law.

The presence of an above-ground cockfighting industry anywhere undermines prohibitions elsewhere. Territorial disregard for the federal anti-cockfighting law gives animal fighters an unwarranted patina of legitimacy, a market for fighting animals and paraphernalia, and venues for the conduct.

Cockfighting is an illegal enterprise, like dogfighting, narcotics trafficking, racketeering, money laundering, and other illicit activities.  It’s time for these public officials to stop abetting these crimes, to start discouraging unimaginable cruelties, and to demonstrate respect for government rulemaking institutions.