Washington, D.C. — Today, leaders at Animal Wellness Action (AWA) and the Animal Wellness Foundation (AWF) applauded Tennessee State Senator Jon Lundberg, R-Bristol, for announcing that he’ll carry legislation this year in Nashville to crack down on the barbaric practice of cockfighting and to bring Tennessee’s anti-cockfighting law into the 21st century. The Volunteer State is just one of a half dozen or so states without felony-level penalties for cockfighting and that weak law is making the state a breeding ground for the global cockfighting industry.

In July 2020, AWA and AWF asked U.S. Attorneys J. Douglas Overbey and Donald Q. Cochran, respectively covering the Eastern and Middle Districts of Tennessee, to investigate allegations that nine Tennesseans appear to be deeply involved in illegal trafficking of fighting animals, with most of them sending birds from Tennessee to far-flung destinations across the world, including transporting fighting birds in violation of federal law to the U.S. Territory of Guam and to Mexico and the Philippines.

“We have solid evidence that Tennessee-based individuals are openly raising birds where their neighbors and passing drivers can see get a clear look at their cockfighting complexes; they are appearing on cockfighting magazine covers and in cockfighting videos; they are touting their fighting records on social media; and they are fraudulently signing shipping records that say they are chicken breeders only,” said Wayne Pacelle, president of Animal Wellness Action. “They are doing this because they think Tennessee’s anti-cockfighting law is so weak that they can get away with this lawlessness.  A felony-level penalty under state law may change their attitude.”

Three Tennessee-based operators signed shipping records for the movement of fighting animals to Guam. Shipments to Guam are just indicators of a far brisker trade in fighting birds to other jurisdictions, including Mexico, the Philippines, and other global cockfighting hotspots. One Tennessee cockfighter, according to evidence obtained by AWF, even hosted two Guamanian cockfighters on his farm, according to images obtained by AWA and AWF.

The shippers who sold to Guam typically use the U.S. Postal Service to transport the birds, packing the live animals into boxes and sending them 8,000 miles from Tennessee to Guam in the cargo holds with multiple stops and without food or water.

Through public records requests to the Guam Department of Agriculture, AWF and AWA founder more than 500 shipments of illegal fighting birds by 60 individuals in the states to Guam. Tennessee cockfighters shipped the sixth largest number of birds, with Oklahoma having the distinction of being the top shipper despite a voter-approved ballot initiative there in 2002 that makes possession of fighting animals a felony.

As a supplement to the Guam records request, AWA and AWF obtained information on other traffickers of fighting birds based in Tennessee. One individual, based in Springfield, who appears in a video broadcast by the Philippines-based network BNTV, boasted of shipping fighting birds to foreign destinations, including Mexico and the Philippines. (here).  One other cockfighting enthusiast, based in Murfreesboro, also appears in a BNTV interview, and concedes his involvement in animal fighting and the illegal sale of birds to foreign nations. “I’ll say over 25 years I won over 250 derbies,” he stated on the network. (here)

A third individual appeared on the cover of “Cockfights” magazine, one of the premier cockfighting industry publications that reports on outcomes of fights from the biggest cockfighting derbies in the world. Other Tennessee-based cockfighters tout his shipments to Mexico and the Philippines. 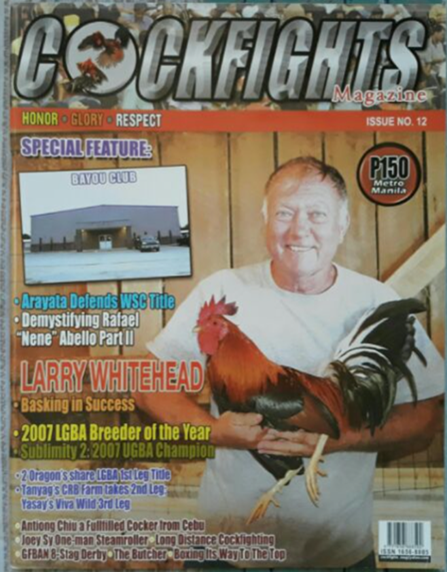 Tennessee is only one of eight states without felony-level penalties for cockfighting, despite a long history of illegal animal fighting. The FBI shut down two major cockfighting complexes in Cocke County in 2005, asserting that local law enforcement there had been corrupted and cockfighting was tied together with prostitution, narcotics, chop shops, and gambling by children. Some years later, there was a series of other cockfighting pits raided, but the fighting and the possession of animals for fighting thrives, and prior law enforcement actions have not been sufficient to deter the crimes.

Possessing and shipping birds for cockfighting have been banned under federal law since 2002 and has been a felony since 2007, when President George W. Bush signed the enhanced penalty provisions into law and also criminalized the sale of cockfighting implements.

“Staged animal fighting is intertwined with other crimes and when we stamp out animal fighting, we make our communities safer,” said Marty Irby, executive director at Animal Wellness Action and a former long-time Tennessean who showed horses throughout the state.

Senator Lundberg, when he was in the State House, helped lead, with former Senator Bill Ketron, R-Murfreesboro, an upgrade of the Tennessee law, making cockfighting a Class A misdemeanor in 2015.  He has continued to advocate for strengthening of the law, aligning the penalties with the state’s anti-dogfighting law and with the federal penalties for illegal animal fighting activities.