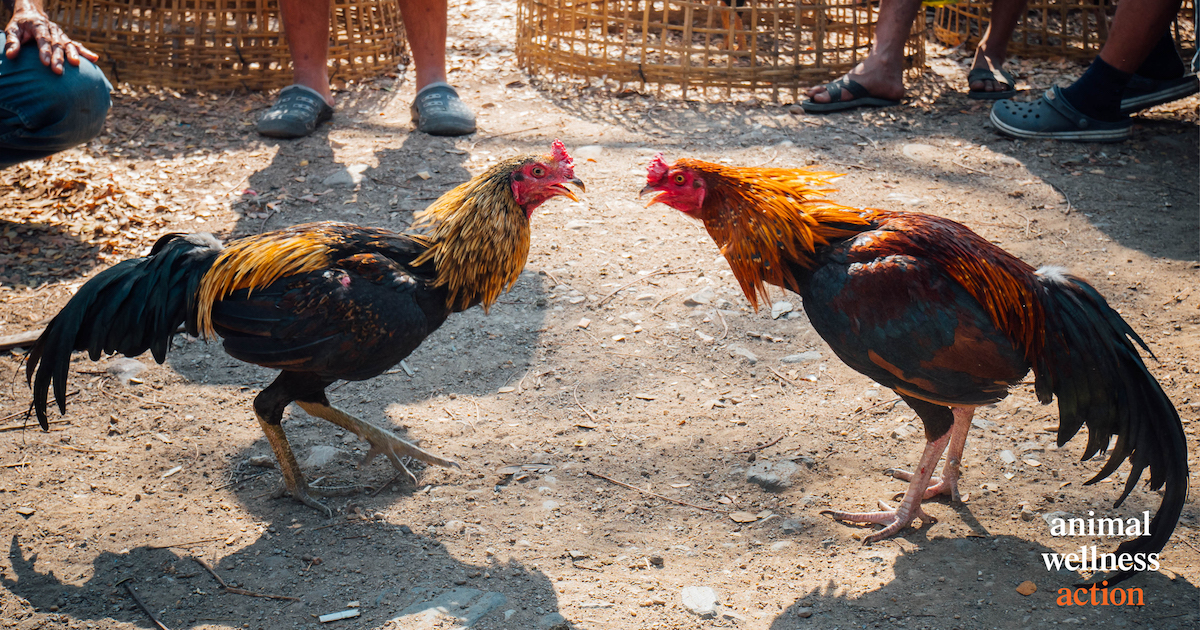 Spectators stir, unroll wads of cash, and finish up their side bets as a pulley lowers two roosters in a partitioned plastic cage from the ceiling and into a center pit. That pit is encircled by dozens of men standing 10 rows deep, behind a two-foot-high wall.  It’s a steeply sloped arena, so that all attendees have an unobstructed view. The plexiglass unit touches the floor, and as it is pulled backed toward the ceiling, the birds are let loose. They lunge and the fight begins..

The birds have no names. With curved ice picks strapped to their legs, they deliver cutting blows, as they jump, flap, thrust, and peck, with the movements almost too quick for an inexperienced spectator to follow. After just a few minutes one goes down, writhing but without any vocalizations. Blood pours from the victim’s chest. The victor pecks and stomps on the downed animal, puncturing his body and punctuating the win.

The men who picked the winning bird cheer, accepting cash from those who misread the birds’ fighting abilities. The handlers, meanwhile, scoop up their birds, with the dead or dying roosters headed for a trash pile out back.

Once the pit is cleared, more roosters are lowered and then released. The winners and the body count mount. The spectators are transfixed. The violence feeding a sort of hard-wired human  voyeurism and atavism..

Club Gallistico of Isle Verde in San Juan is one of dozens of arenas in this U.S. territory of Puerto Rico. In fact, when you fly into San Juan airport, you can’t miss a large arena with “Live Cockfights” emblazoned in neon on the facade. The blaring sign may draw the curious, but most attendees are seasoned enthusiasts. .

The important and ongoing debate over Puerto Rico becoming the 51st state – predicated on the notion that 3.3 million citizens there should have full voting and economic rights – should not obscure the jurisdiction’s existing relationship to the United States: it is a territory, deriving a range of benefits from its close association with the nation while acceding to a range of responsibilities and rules codified by the federal government..

Our nation has long benefitted from the Puerto Rican diaspora, with more than four million people calling cities and towns on the mainland home. Add up the citizens stateside and on island and there are seven million Americans of Puerto Rican heritage. That makes them one of the largest ethnic groups in the nation. Puerto Ricans serve in Congress, on the federal judiciary, in the military, and in just about every other role within American government and business..

Like every ethnic group in America, the views of Puerto Rican are not monolithic. Puerto Ricans range across the political spectrum, as Democrats, Independents, and Republicans. Some favor statehood, others territorial status, and a small group want independence from the United States..

They also share varying views about how animals should be treated. And, apparently, no animal issue is more widely discussed among island residents than cockfighting. In 2019, a new federal law took effect to make staged fights a federal felony, threatening to shutter the 100 cockfighting arenas. In response, some cockfighters in the Commonwealth rallied at the capitol in San Juan demanding redress, while also defying the law and continuing to ply their trade. At the same time, hundreds of rank-and-file Puerto Ricans contacted Animal Wellness Action and demanded that authorities halt illegal cockfighting..

The Congress formulated its first anti-cockfighting law in 1976, but it was full of loopholes. At the time, six states and five territories hosted legal cockfights, and the law allowed shipments of fighting birds to any state where the practice was legal. Perhaps an additional two dozen states had flaccid, almost unusable anti-cockfighting laws. There were national and state cockfighting associations, with tens of thousands of people engaging in fighting, raising, and selling birds for that purpose, and otherwise immersed in this quasi-legal industry..

A stepped-up campaign to outlaw cockfighting everywhere began in 1998. That year, voters in Arizona and Missouri took matters into their own hands and banned cockfighting by ballot initiative, after lawmakers refused to ban the practice. Oklahoma voters followed in 2002. It wasn’t until 2007 that lawmakers in New Mexico and Louisiana – sensitive to their status as the only two states with legal cockfighting – finally banned it..

Still, more than a few states remained as hotbeds of cockfighting. Alabama has had the weakest law in the nation, with the law not updated since 1896 and providing a maximum fine of $50. Major pits operated in Kentucky, Tennessee, and other states.
It had always been a global business and the United States, in some respects, had become the cockfighting breeding farm to the world, with breeding with winning records shipping hundreds of thousands of animals for fights staged on several continents.

No refuge in the United States

While the infirmities of some state and territorial laws continue to be embarrassing, cockfighters can no longer escape the reach of U.S. law. In the 21st century, Congress has strengthened the law five times – with George W. Bush, Barack Obama, and then Donald Trump signing a series of provisions into law making it a felony to fight animals, to possess dogs or birds for fighting purposes, to transport the animals, or to bring a minor to a fight. It even makes attendance at a cockfight a federal misdemeanor..

That’s now true for cockfighters in Puerto Rico and Guam..

In May 2019, Club Gallistico and other fight venue operators challenged the newest provisions of the anti-fighting law. “N]either the Commonwealth’s political statues, nor the Territorial Clause, impede the United States Government from enacting laws that apply to all citizens of this Nation alike, whether as a state or territory,” wrote Judge Gustavo Gelpí  in siding with the United States in an October 2019 ruling.

And earlier this year, Federal Appeals Court Judge Sandra L. Lynch, on behalf of a panel for the court, wrote that the U.S. law against cockfighting “is a valid exercise of Congress’s Commerce Clause power and does not violate plaintiffs’ individual rights.” Two months earlier, a U.S. District Court judge on Guam ruled similarly.

Puerto Rico cockfighters and their allies disobey the rule of law .

In January, soon after taking office, Governor Pedro Pierluisi stated that he is “committed to supporting an industry that generates jobs and income for our economy, that represents our culture and our history.”  He declared that he and Jennifer Gonzalez Colon, the Puerto Rico’s Resident Commissioner in Congress, “will continue to fight for them.” He and his predecessor, Wanda Vázquez Garced, have said, despite judicial determinations to the contrary, that cockfighting may continue so long as animals are not imported for the purpose. And Congresswoman Gonzalez Colon has introduced legislation in Congress to repeal the ban on cockfighting..

Yet, until there is a change in the law, it is not the Commonwealth’s prerogative to opt out of this U.S. law. And whether Puerto Rico is a state or a territory, the outcome when it comes to cockfighting is the same: it is illegal..

The federal law against dogfighting and cockfighting never singled out Puerto Rico, Guam, or any other U.S. territory. The federal law, step by step, applied prohibitions to cockfighting in the territories, and finally in 2018, the Congress finished the job in banning the practice on every acre of U.S. soil..

It’s plain that the complaints of the cockfighters in Puerto Rico and Guam are little different in content from the crows of stateside cockfighters as the laws threatened their participation in their pursuit. The arguments of cockfighters everywhere, it seems, are cloaked in language about heritage and culture and freedom and constitutional rights. Yet the courts have turned away their claims time and again..

No jurisdiction within the U.S. should be an enclave or refuge for this kind of intentional cruelty. Staged fights pit animals against each other for profit, gambling, and entertainment. The animals are often drugged to heighten their aggression and are forced to keep fighting even after suffering broken bones, deep gashes, punctured lungs, and pierced eyes..

The presence of an above-ground industry anywhere undermines prohibitions elsewhere. Territorial tolerance for cockfighting gives animal fighters an unwarranted patina of legitimacy, a market for fighting animals and paraphernalia, and venues for the conduct..

In fact, Animal Wellness Action (AWA) conducted an investigation on Guam and determined that there were more than 500 illegal shipments of fighting birds from the state-based U.S. cockfighters to Guam cockfighters between November 2016 and November 2020. These shipments were a means of generating profits for statewide cockfighters, with the government of Guam knowingly allowing these illegal transports. AWA has reviewed 50 videos, produced in 2020 by a Filipino television network, with U.S. cockfighters promoting the sale of their fighting animals to Guam, Mexico, the Philippines, Vietnam, and other animal fighting hot spots despite those shipments being felony offenses..

AWA has conducted investigations in recent months in the biggest redoubts of cockfighting — Alabama, California, Guam, Hawaii, Kentucky, North Carolina, Oklahoma, Puerto Rico and Tennessee. Like the Congress, we want it stopped wherever it occurs – no matter the zip code, the languages spoken by the people affixing knives on the birds’ legs, the volubility of the lawmakers abetting the crime, or the size of the arena where this malice unfolds..

How to help? Contact your Members of Congress here and ask them to cosponsor the Animal Cruelty Enforcement (ACE) Act, H.R. 1016, that would crackdown on this abuse..

Wayne Pacelle, president of Animal Wellness Action and the Center for a Humane Economy, is a two-time New York Times best-selling author.