Send any information about illegal animal fighting to our anonymous email:
Email here

$5,000 Reward Offered in Nevada by Animal Wellness Groups for Info that Leads to Cockfighting Arrests, Convictions

Braun, Whitehouse, Kennedy, Other Senators Introduce Bill to Crack Down on Animal Cruelty 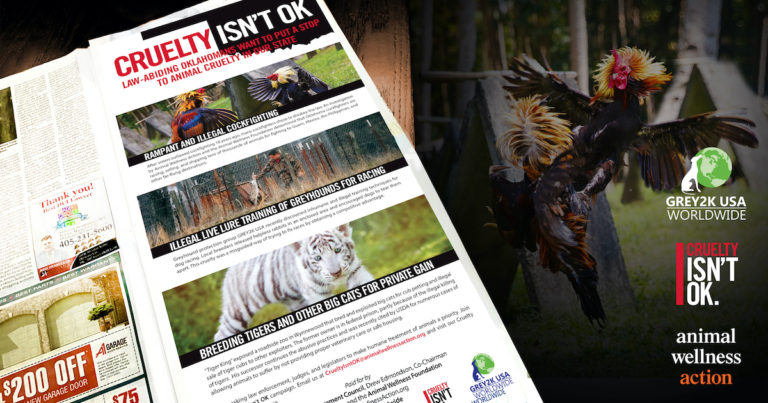 AWA-sponsored advertisement in the The Oklahoman and the Tulsa World

Dream about animal protection ads during the Super Bowl?

Well, it happened. One dog lover is investing $6 million in an ad about a vet school whose medical interventions spared his beloved companion. And Animal Wellness Action is running an anti-cockfighting ad on the broadcast in Guam, which is a U.S. Territory that has long been a stronghold for staged fights.

Two Guamanians are featured in the ad, describing cockfighting as “about gambling, not about their culture” and as a “medieval practice” where “animals fight and die for our amusement.” The ad will first air during the Super Bowl and continue broadcasting throughout February on television programs and networks.

And you can help combat these animal cruelty crimes by contacting us with any tips about illegal cockfighting activities at:
animalcrueltytips@animalwellnessaction.org

Animal Wellness supports equal application of cockfighting ban to all parts of the country, Including Guam

Anti-cockfighting group to have ‘investigators’ on Guam

Guam can live without cockfighting

Cockfighting board dissolves as ban approaches