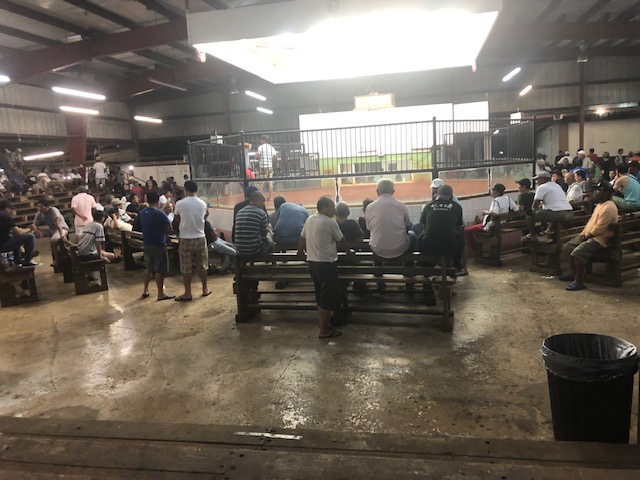 My Visit To A Cockfight At “The Dome” In Guam

Spectators stirred and hollered as I walked into the cockfighting arena this week.

Not because of me, perhaps the only non-Pacific Islander in a crowd of 125 or so men. And not because I’d been the highest-profile opponent of their sport for two decades.

A fight was in progress. Two birds in combat had their attention.

I had just paid my admission fee of $5, and in the plexiglass-enclosed pit, the roosters jumped and kicked at each other. I hadn’t even had time to sit down on a bleacher seat before the fight was over.

One bird dealt a cutting blow to his combatant with a three-inch blade fastened to his leg. The victim was gasping, a heaving clump of brightly and beautifully colored feathers, a downed animal unable to defend himself as the assault continued. The referee called the fight, and a handler scooped up the triumphant rooster, flashing a smile to the crowd. The other handler picked up his dying bird by the neck. He was destined for the trash heap out back.

Men unrolled wads of cash and settled their debts.

It was this past Sunday, and I was on the outskirts of the village of Dededo, in the north of Guam, a U.S. territory nearer to Manilla and Tokyo than to Honolulu. Many Americans know Guam because of Andersen Air Force Base and other military installations.  But the military personnel are just a subset of its 160,000 people, whose major ethnic groups are Chamorros and Filipinos.

Nearly 10 months ago I celebrated with colleagues at Animal Wellness Action as the Congress passed and President Trump signed a 2018 Farm bill that included three major animal welfare reforms.  One reform (the Parity in Animal Cruelty Enforcement Act), was to apply all federal prohibitions against dogfighting and cockfighting to every part of the United States, including the five U.S. territories where cockfighting thrives.

I came to Guam with Marion Look-Jameson, a devoted animal advocate and friend who’d grown up on the island and loved it and its people dearly. Our strategy is to develop and implement a game plan to promote adherence to and enforcement of the federal law. The President signed the measure into law on December 12, but Congressional negotiators included a provision in the Bill he signed to delay the effective date of the anti-animal fighting provision for one year, in order to give the territories time to transition to an animal-fighting-free future. Marion and I knew that vigorous enforcement of the upgraded federal anti-fighting law was not preordained, especially because political leaders in all of the territories had vocally opposed the provision. In fact, in the wake of its passage, they’ve urged repeal of the provision and questioned the action by the Congress as an affront to territorial sovereignty and their culture.

On my first full day in Guam, my host put Marion and me in touch with a street-smart Guamanian. We met at a local coffee shop. I asked him where the Sunday cockfight would take place. “Let me confirm it’s happening and I’ll send you the details.”

Two hours later, the message came through.  The fights were set for 9 p.m., at The Dome, perhaps the island’s biggest cockfighting arena.

I’d been on raids of cockfighting farms where would-be fighting birds are raised and trained. I’d seen plenty of video of fights through the years, but as a very visible and outspoken leader of an animal welfare group, I’d be the last guy the organizers would let in for an illegal live fight.

All 50 states forbid cockfighting, but not the territories, so my trip to Guam presented a rare opportunity to see the conduct firsthand at a place where the organizers believed their fights were legal, at least until the latest provisions of the Federal law take effect in a couple of months.

I checked to see if I might get a local guy to join me but had no luck.  For most animal people, seeing a cockfight is last on the list of favored Sunday activities. I worried that I might be a recognizable target if I went alone, given that I’d led two anti-cockfighting initiatives in Arizona and Missouri 20 years ago and hadn’t let up on the practitioners much since then. But I’d come 7,500 miles and wasn’t about to go home without trying my best to see this staged cruelty firsthand.

So, at 8:35 p.m. I took off in a car I borrowed from a local activist. He drove ahead and led me toward Dededo. I took a wrong turn at one point and flipped on my navigation to find my way on my own for the final mile. There were no houses on the road and it was dark and desolate until on the left there was a barn-type structure with bright lights and commotion.

I pulled into the grass field doubling as a parking lot, with at least 60 trucks and cars lined up near the Dome.

With my car facing the arena, I saw the backs of men on the top row of bleachers, sitting and standing inside an open-sided building.  There was a five-foot-high chain-link fence bounding the arena. I walked toward the barn, and then around to the right, I found the entrance there and slowly walked in.  A woman stopped me on the way in.  I was relieved she didn’t say “No thanks, mister.” Instead, she offered up, “Five dollars, please.”

After paying the price of admission, I saw that dozens gathered around the pit, which had a radius of at least 20 feet wide and had plexiglass paneling all the way around.  There was a white-board as a background that gave details about the structure of the event.  It was a two-cock derby.

After the tail end of the first fight I witnessed, more than five minutes elapsed before other handlers came out with birds tucked under the arms. In the middle of the pit, they picked up their birds and put them beak to beak to enrage them. The type of fight is defined by the type of weapon, and this was a long-knife fight, with three-inch blades strapped to the birds’ legs.

They repeated the beak-to-beak taunting, and after the third face-to-face provocation, a man in the arena starting yelling to no one in particular in the crowd.  Men in the stands started yelling and screaming in return. This was the pre-fight betting, and you’d have to know this world to know there was any order to the chaos.

One more face-to-face encounter orchestrated by the handlers and then they let them loose in the pit. The bird with the mostly white feathers almost immediately scored a major hit, and the darker brown bird was down.  The white bird pressed the case, with more kicking and pecking. It was over in just more than 30 seconds.  Indeed, that’s the point of the lethal weapons on the birds – it ensures bloodletting and a speedy outcome. A bloodless, endless chicken fight is not what the spectators desire.

Organizers brought in more handlers and more birds. The pattern was uninterrupted: provoking the birds, chaotic betting, and short and bloody fights, I’d seen enough.  I walked out and headed back to my car and back into a world where this kind of animal abuse is removed from our daily experiences.

As we close in on December 12th, one question is, will the enthusiasts of cockfighting in our nation abide by the rule of law or persist in continuing a cruel practice that can no longer withstand any honest moral scrutiny?  The other question is, will federal and territorial authorities demand that the rule of law be observed?  Increasingly, in our society, cruelty cannot stand the spotlight and if there’s an issue where a societal consensus exists, it’s staged fights between animals. There should be no refuge for this calculated cruelty and gambling, not under any bright lights or in any dim corner of our Nation or any other part of the world.