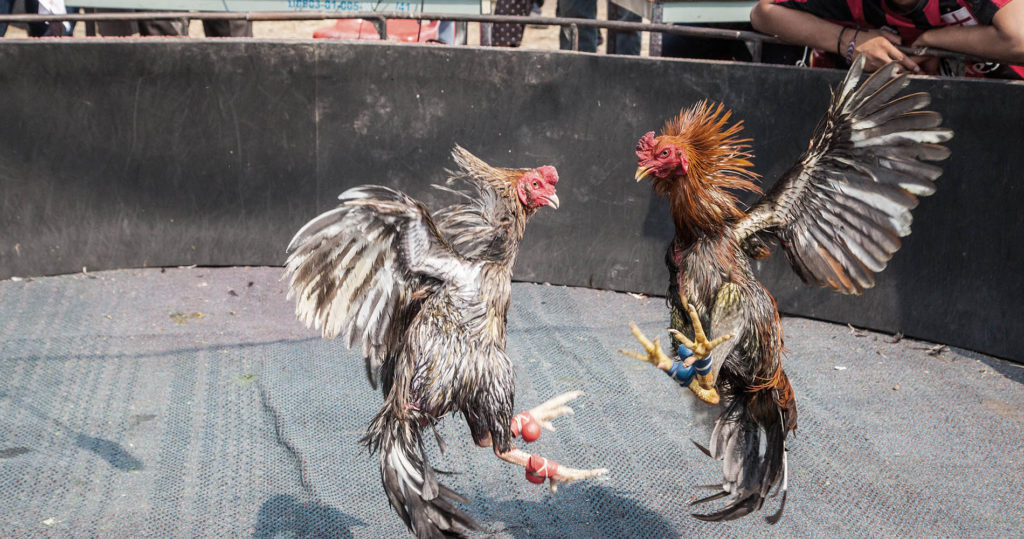 The scale of the violence and crime is startling to fathom.

In Mexico, gang leaders got inside an arena in March, sealed off exit routes, and shot and killed 20 people attending a cockfighting in Michoacán state. Three of the dead were Americans, including a mother of four from Illinois and, according to the Michoacán Prosecutor’s Office, the owner of the cockfighting arena.

In the Philippines, there has been a wave of kidnappings and murders of people involved in cockfighting, including the massive on-line gambling at cockfights known as e-Sabong. According to the National Bureau of Investigations and to news reports in the Philippines, “ten men disappeared in Laguna and Manila on January 13, and another six were attending a cockfighting tournament in the capital before going missing on the same day. Another ten men from Bulacan also never made it home.”

These are astonishing crimes – on the scale of some of the mass school or movie-theater shootings we’ve had in the United States.

But those school shootings were typically the acts of disturbed, emotionally disconnected teens of young adult males.  The premeditated violence at cockfights is conducted by adults, and they are far more predictable outcomes in a subculture of violence, gambling, and other criminal activity. Only in some foreign nations is there a thin veneer of legality to the cockfighting itself.

We may think of the violence at the cockfights in Mexico and the Philippines as far off, otherworldly. But the ties to the U.S. are documented. In fact, U.S. cockfighters play a central role in these foreign fights, regarded as the most skilled fighting enthusiasts in the world, and themselves claiming trophies from the major fighting derbies around the world.

U.S. is Gamecock Capital of the World

When the federal authorities issued indictments against Brent Easterling and six family members in Alabama some months ago under the federal animal fighting statute, they exposed the family’s fighting pits in central Alabama and their illegal sales of fighting animal and implements.  But an Animal Wellness Action investigation documented that Easterling also operated a gamecock farm in Mexico, where he often fought his birds and touted their wins.

Birds that win fights bolster the reputation of the cockfighter among other enthusiasts and allow him to sell his birds for higher prices. An Alabama cockfighter we investigated to the north of the Easterling said he alone ships 6,000 fighting birds a year to Mexico.  He’s one of hundreds of major cockfighting traffickers supplying the pits in Mexico with fighting roosters.

There can be no doubt that Mexico is the single largest destination of fighting animals raised in the United States. The Philippines, though thousands of miles from the U.S., is the second biggest destination.  One major California cockfighting kingpin has shipped birds by the thousands to the Philippines, and he allegedly has a cockfighting farm in the Philippines as well. There are perhaps 25 other countries, mainly in Central and South America and the western Pacific Rim, that are the terminus for tens of thousands of fighting birds.

Penalties for Raising, Possessing, and Shipping Fighting Birds Are Felonies

Last month, federal prosecutors unsealed indictments against at least 17 Kentuckians allegedly involved in cockfighting, bribery, and other related crimes. Federal authorities have pinpointed four major fighting pits in eastern Kentucky, including one arena that, according to the Lexington Herald Leader, “featured stadium-style seating, a concession area, a room to sell accessories such as the sharp gaffs attached to birds’ legs, and enclosed cockfighting pits.”

A direct intervention during a fight is typically how law enforcement apprehends dogfighters or cockfighters. Prior to the raid, law enforcement might get a tip from an anonymous source about the fight schedule or the coordinates of a fighting pit from an undercover agent. And sometimes it’s just serendipity: officers move in to bust a drug den and find an animal fight in progress.

I’m all for these heroic interventions to stop staged violence against animals. Plaudits to the men and women in blue for interdicting these crimes.

But with highly clandestine enterprises like animal fighting, it’s hard to catch these criminals in the act. They might stage the fight in a remote barn or shed, in a field, or even in a basement. Organized animal fighters know they are violating the law. They often situate their fights carefully, setting up sentries to keep an eye out for law enforcement and keeping a close hold on the details of the fight so only the enthusiasts learn of it.

Those precautions are a barrier to enforcement.

My message to law enforcement is: Stop the fights before they begin.

Nobody running a massive gamecock farm in the U.S. is simply breeding the animals as a hobby or pastime.  They are training them to fight, fighting them, and selling them to other enthusiasts for fighting. The only way buyers will hand over cash for the birds – often $2,000 per animal – is if the bloodlines have a history of winning at derbies.

That’s precisely why federal law provides for severe penalties for an individual who “possesses” an animal for fighting, “transports the animal in interstate or foreign commerce,” or “uses the mail service” to ship an animal intended for use in a fight.

Animal Wellness Action and its affiliates have provided comprehensive details to law enforcement about widespread, illegal cockfighting after conducting seven investigations in U.S. states and territories – in Alabama, Guam, Hawaii, Kentucky, North Carolina, Oklahoma, and Tennessee. Major cockfighters own and raise thousands of fighting birds, tethering their birds to barrels or A-frame huts in fields and other open spaces. It’s easy to identify these operations, because farmers raising birds for meat or eggs don’t tether their birds or keep them housed alone in cages.

Our investigations have collectively revealed that the United States has become the breeding ground for the global industry, with cockfighters raising hundreds of thousands of animals for fighting and then shipping them to other cockfighters for final acts in fighting pits and arenas across the globe, with a value in the tens or even hundreds of millions.

Oklahoma State Representative Justin Humphrey, from rural southwest Oklahoma, has advanced legislation to decriminalize some aspects of cockfighting and weaken penalties for remaining offenses to the level of a speeding ticket. He told the Journal Record in Oklahoma City that his constituents are “raising them [roosters] as game breed stock.” In the same story, Humphrey said the birds are “typically sold overseas to countries where cockfighting is permitted for $250 to $500 a bird,” and that cockfighting is a billion-dollar industry in places like the Philippines. “Oklahoma’s breeders should not be penalized just for raising the birds,” Humphrey said.

No, Representative Humphrey, stopping the raising of birds for fighting is precisely the point of the state and federal laws. If the birds are stabbed and slashed to death in fights in Atoka County in Oklahoma or in Manilla or in Michoacán state, it’s the same outcome for the animal. Banning the sale and possession of fighting animals is the same principle as banning poppy and coca farms and also banning the sale and trafficking of heroin and cocaine. Our anti-drug laws don’t just criminalize injecting heroine into your veins or snorting cocaine. We ban the trade at its points of origin.

In Oklahoma alone, we have built dossiers on nearly 20 major cockfighting operators, including Brenda and John Bottoms of LeFlore County and Bill McNatt of Haskell County, who were the top two shippers of fighting birds to Guam.  The Bottoms shipped 2,197 animals to Guam and McNatt moved 1,945, according to live-animal shipping records reviewed by AWA.  B.L. Cozad of Comanche County appeared on HBO Sports, showed the television crew his fighting birds, and dared federal and state authorities to arrest him, openly admitting on national television that he engages in cockfighting activities and falsely claiming he has a constitutional right to engage in the activities.

Now is the time for law enforcement to move against the biggest underground animal cruelty industry in the United States. And there is no need to focus exclusively on catching the criminals while they’re in the act of fighting their birds. Just stop them from raising thousands of fighting birds and shipping them all over the world.  Whether they fully understand it or not, these people and their commerce are tied to ruthless organized criminal syndicates in Mexico and the Philippines – to the cartels and the kidnappers.  It’s all bound together.

The U.S. and state authorities must not treat them as harmless “breeders,” but as an essential link in the chain of a massive global criminal network that knowingly spawns animal cruelty, murder, kidnapping, narcotics trafficking, money laundering, and the worst crimes in the world.