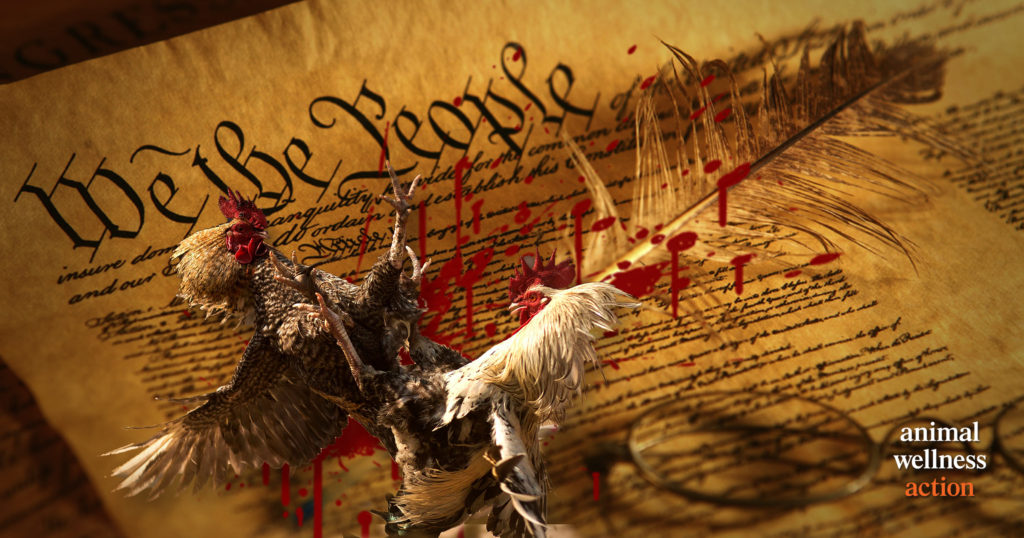 Far-fetched courtroom strategies are the rage when it comes to cockfighting.

It may be the down season for the blood sport, but from Puerto Rico to Louisiana to Guam, the knives are out in the federal courts when it comes to cockfighting.

The most recent courtroom proceeding comes in Louisiana, where Lloyd Plumbar has mounted a novel defense after a local sheriff nabbed him for violating the state’s 2008 ban on cockfighting.

Plumbar says he is “Pastor at Holy Fight Ministries,” and he’s invoking a “freedom of religion” argument under the First Amendment to the U.S. Constitution as his get out of jail card.

In the civil action filed in federal court in the Middle District of Louisiana, Jim Holt, Plumbar’s attorney, wrote:

“Reverend Plumbar, Holy Fight Ministries and its congregation hold the sincere religious belief that cockfighting represents that while they strive for CHRIST, they have a necessary symbolic physical manifestation, an epiphany through the fighting cock, a religious mandate of the struggle between good and evil, a struggle for life or death for the Salvation of the soul, and thus cockfighting is an integral and essential part of their religious faith.”

Even if you mock him for this legal sophistry, give him credit for the gumption to make these claims in a federal legal proceeding.

The judge, of course, was having none of it.  “Unrestricted freedom to exercise one component of Plaintiffs’ religious practice is outweighed by the public’s interest, as reflected in duly passed legislation that aims to combat animal cruelty,” he wrote in July, in siding with the government.  “[T]he weight of evidence brought by Defendants cannot be ignored, particularly as Plaintiffs, who bear the burden of proof, have provided virtually none.”

The state of Louisiana, in summary judgment against Mr. Plumbar, provided physical evidence of illegal cockfighting.  “The photos depicted a cockfighting arena littered with discarded food and alcohol containers; a handwritten betting ledger; “cockhouse” fees and membership rules; rooster corpses; and other indicators of a commercial cockfighting operation,” wrote the judge.

Pastor Plumbar did not, apparently, treat his church as his temple.

There is similar rhetoric from Puerto Rico’s cockfighters and the Commonwealth’s political establishment.

There, the cockfighters’ attorneys, now pleading their case before U.S. Court of Appeals for the First Circuit, argue that “the criminalization of cockfighting infringes” on “the valued rights of freedom of speech and freedom of association of all Puerto Ricans.”

Last year, U.S. District Court Judge Gustavo Gelpi swatted down the original formulation of the cockfighters’ arguments in their quest to upend the federal ban on animal fighting, including in the U.S. territories. “Neither the Commonwealth’s political statutes, nor the Territorial Clause, impede the United States Government from enacting laws that apply to all citizens of this Nation alike, whether as a state or territory,” wrote Judge Gelpi, a native of Puerto Rico.

After that opinion, the cockfighters asked the First Circuit to issue an emergency stay to block the imposition of the federal anti-animal fighting law. A three-judge panel for the Court denied that request.

In their subsequent pleadings, the lawyers for Puerto Rico’s cockfighters claimed that “the criminalization of cockfighting in Puerto Rico deters Appellants from assembling to discuss and express their views regarding cockfighting.”

Yet no one has told the cockfighters that they cannot advocate for cockfighting. On the contrary,  the Commonwealth’s political leaders are pandering to them to an embarrassing degree.  The government passed a sham Commonwealth law on the day before the federal law was to go into effect and essentially gave the cockfighters the green light to engage in illegal conduct.

How do we know cockfighters are continuing to flout the law?  Because after AWA and the Animal Wellness Foundation announced a rewards program, dozens of Puerto Ricans wrote to us, expressing their disdain for cockfighting and sharing very granular details of illegal cockfights.  .

They provided us with hard evidence of cockfighting at 25 venues, at least 15 of which continue to operate on a regular basis. Venue operators continue to promote these illegal activities with physical posters and social media posts. (Animal Wellness Action has posted copies of some of these promotional materials here.)

So here we have the Commonwealth’s political leaders and the cockfighters in their federal court pleadings saying the federal law explicitly bans cockfighting — recognizing that our system of government affords judicial redress after the legislative branch acts — but they’ve been conspiring to break the law all the while.

Here’s what they’re telling us: “We know the laws ban cockfighting on Puerto Rico. We are appealing to the federal courts to invalidate the law. But we are going to cockfight anyway no matter what the courts say.”

The federal judges hearing the cockfighters’ appeal should take note of the Commonwealth’s defiance.

And mind you, many of these legislators are advocates of statehood, including Governor Wanda Vázquez Garced and Resident Commissioner Jennifer González-Colón.  Statehood comes with responsibilities, and the most basic one is to uphold the laws of the United States.

“Puerto Rico is seeking billions of dollars in aid from the United States as a consequence of the hurricanes and earthquakes that have devastated parts of our island,” added Ana Maria Hernández Martí, an Animal Law attorney based in San Juan. “I am struck by the terrible inconsistency that politicians, including many who support statehood, are openly defying federal laws against animal cruelty. They cannot have it both ways.”

“Staged animal fighting is not representative of Puerto Rico, it does not reflect our values, nor our culture,” adds Marti.

Our pleadings, and the lucid arguments from the United States, are all submitted in the concurrent case on Guam. A U.S. District Court Judge there should soon render an opinion.

“Cultural rights merit consideration,” wrote Animal Wellness Action and other groups in their amicus curiae brief supporting the United States in the case on Guam, “but Congress has weighed the import of cultural attachment to cockfighting against its detrimental effects on interstate commerce and concluded that no justification exists to continue permitting the abhorrent practice in the United States.”

In the U.S. Virgin Islands — also a cockfighting hot spot — the U.S. Attorney there today signaled today that she won’t tolerate staged combat between animals. “Law enforcement officers in our communities have received recent reports that cockfighting matches are continuing, even though the federal law prohibiting these activities went into effect on December 20, 2019,” U.S. Attorney Gretchen C.F. Shappert announced. “Cockfighting promoters need to understand that participation in an animal fighting venture is a felony that carries a penalty up to five years in prison.”

Indeed, the rule of law matters, as U.S. Attorney Shappert recognizes. And like other law enforcement officials, she understands there’s no conflict between enforcing our anti-cruelty laws and honoring free speech or freedom of religion.  There is no tension between these values and principles despite vain efforts by animal cruelty practitioners to conflate them. That’s a legal reality that should come into sharper focus as the cockfighters pursue their dead-end journey through the U.S. court system.

Take Action by signing our petition to tell Attorney General Barr to enforce the law by halting the trafficking of fighting animals from the U.S. to other countries.