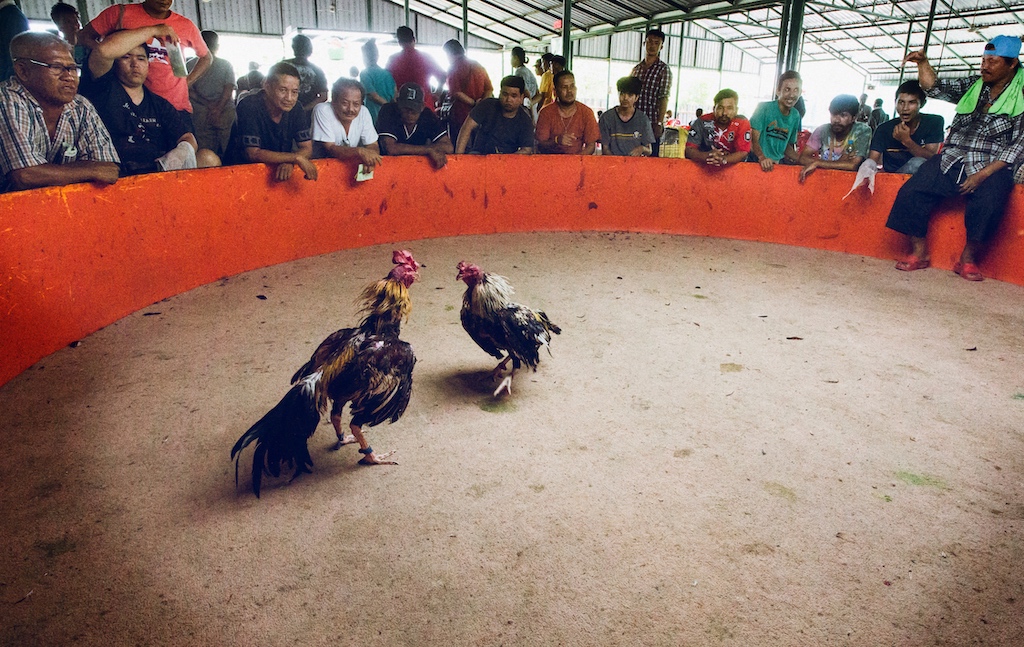 It hasn’t been a good week for cockfighting syndicates. More than a dozen animal-fighting enthusiasts in Kentucky face charges under federal law, while other members of the larger clan are being confronted with import restrictions on the sale of their fighting birds and the prospect that more enforcement actions may unravel their illegal business operations.

This week, federal prosecutors unsealed indictments against at least 17 Kentuckians allegedly involved in cockfighting, bribery, and other closely entangled crimes. Federal authorities have pinpointed four major fighting pits in east Kentucky, including one arena that, according to the Lexington Herald Leader, “featured stadium-style seating, a concession area, a room to sell accessories such as the sharp gaffs attached to birds’ legs, and enclosed cockfighting pits.”

About 18 months ago, Animal Wellness Action (AWA) released a detailed investigation and charged that Kentucky was a hub of the American and global cockfighting industry, naming the individuals and documenting their involvement through an array of sources. These individuals were almost certainly fighting birds in the U.S. but also shipping thousands of animals to Guam, Mexico, Honduras, the Philippines, and more than a dozen other nations to be hacked up in fights.

On Monday, the Guam Department of Agriculture announced it was temporarily halting live imports of birds from east of the Colorado border to prevent the introduction there of avian influenza, which is infecting birds in the East and Midwest. That ban should be in place for months, and it will have the effect of choking off illegal shipments of fighting birds to the U.S. territory from Oklahoma and other cockfighting hotspots.

In the first two months of this year, Guam officials granted import permits for dozens of birds to John and Brenda Bottoms and Bill McNatt of southeast Oklahoma. These individuals are not legitimate agricultural producers; they are known cockfighters. During the last five years, Guam authorities have allowed Bottoms and McNatt to send 5,000 birds via the U.S. Postal Service to Guam, with the birds packed in boxes without food or water in what amounts to a 7,200-mile, multi-day passage. They have shipped nearly 40 percent of the 11,561 fighting and breeding birds trafficked to Guam from state-side cockfighters over the last five years. It’s been a crime to move fighting animals across state or territorial lines since 2002 and a felony offense since 2007.

At the end of December, AWA obtained a secret schedule of cockfights set to start in January at The Dome, Guam’s largest fighting arena. We then released drone footage showing likely illegal cockfighting activity at The Dome, even after we publicly announced we’d obtained the schedule and alerted federal authorities to the scheme.

Even prior to the new rules to contend with avian influenza, we have called on the Guam Department of Agriculture to see that U.S. laws against animal cruelty are not undermined in their permitting process. Guam has no commercial poultry or show-bird industry, so there is no other legitimate rationale for this volume of shipments of adult male bird except for cockfighting purposes.

In January, AWA released video footage that, according to informants, documents illegal cockfighting by a law enforcement agent working at the Guam Department of Agriculture. The individual, Ken San Nicolas, is a Commodity Inspector with the agency and is one of a handful of trained and sworn law enforcement officers within that division. He’s been at the agency for five years, as more than 11,000 fighting birds moved from the states to Guam’s fighting pits.

But Guam, a U.S. territory, is not alone in allowing this criminal behavior to proceed. In January 2021, soon after taking office, Puerto Rico Governor Pedro Pierluisi expressed support for the continuation of cockfighting on the island, even after the federal courts affirmed the authority of the United States to bar cockfighting everywhere in the United States. Governor Pierluisi stated that he is “committed to supporting an industry that generates jobs and income for our economy, that represents our culture and our history.”  He declared that he and Jennifer Gonzalez Colon, Puerto Rico’s Resident Commissioner in Congress, “will continue to fight for them.” Pierluisi and his predecessor, Wanda Vázquez Garced, have said, without any legal basis or authority, that cockfighting may continue so long as animals are not imported for the purpose.

Gonzalez Colon and other congressional delegates representing Guam and the Virgin Islands have called on federal lawmakers to repeal the federal ban on shipping fighting birds to their territories. Fortunately, their legislation has not attracted a single Congressional supporter from the states. Polling shows strong opposition to cockfighting among residents of Guam and Puerto Rico.

And in Oklahoma, where two decades ago voters approved a ban on cockfighting, State Rep. Jason Humphrey is seeking to overturn the citizen initiative. Humphrey’s measure would eliminate felony-level penalties for cockfighting and decriminalize associated activities, such as breeding and training birds to fight. Humphrey represents Atoka County, where AWA has identified a major illegal fighting arena and alerted law enforcement to its presence. But the sheriffs’ office there has failed to take action in spite of our providing very detailed information on the planned crimes.

In 2019, Animal Wellness Action and its affiliates achieved a milestone in the annals of animal welfare: a ban on animal fighting on every inch of American soil. Once we secured an amendment to the federal animal fighting law that applies all fighting prohibitions to the U.S. territories, we immediately turned to the task of promoting its enforcement.  Our investigation of Guam’s cockfighting helped us identify 100 of the top cockfighting traffickers in the United States, concentrated in Oklahoma, Alabama, Tennessee, North Carolina, and Kentucky.

Federal law enforcement has responded, treating the federal law against animal fighting as a statute that must be applied on the ground.

Last summer, U.S. authorities arrested Brent Easterling and half a dozen of his family members some months after AWA released a dossier on him and a set of major fight-operators in Alabama. Easterling L&L Game Farm had frequent posts on social media boasting about fighting birds winning in pits throughout the world.

The United States has also conducted a series of raids against cockfighters in Georgia.

Federal Government Has Tools for Crackdown

We’ve also emphasized that the Department of Justice and other federal agencies need not catch the perpetrators in the act of fighting their birds. The penalties are equally strong for transporting or even possessing fighting birds.  Many operations are in plain view, and the cockfighters have left a trail of footprints to and from the cockfighting arenas.

To be sure, AWA and its affiliates are working with authorities to dismantle a stubborn and substantial network of cockfighting operations in the United States. When we succeed, we’ll stop an enormous amount of cruelty in the U.S. and beyond since the U.S. has quietly become the primary breeding ground for the global trade in fighting animals.