State Ban on Cockfighting by Year 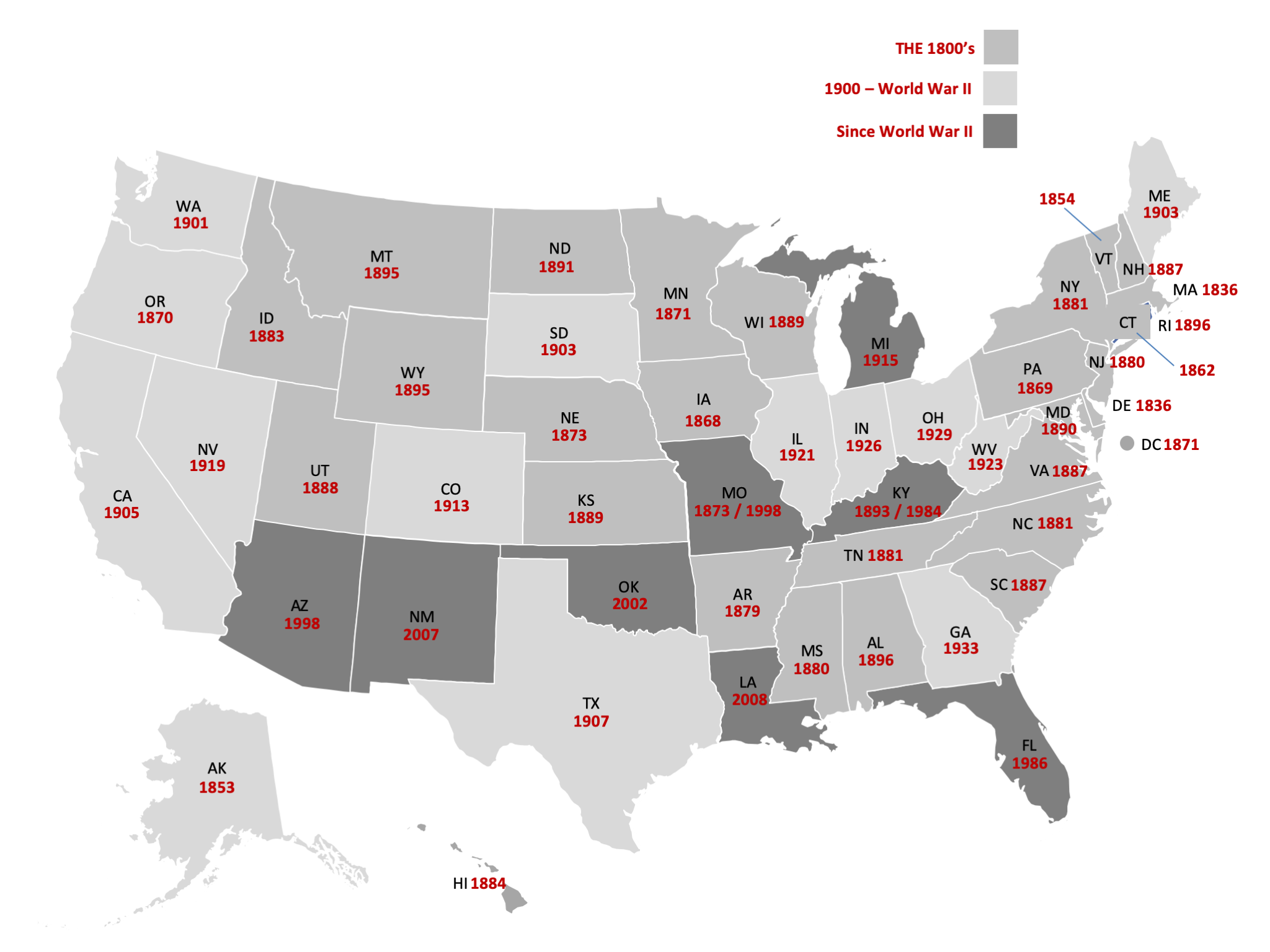 Summary of provisions of Section 26

Key prohibitions related to staged animal fighting ventures
Under current federal law, it is a crime to:

Legislative History of Section 26 of the federal Animal Welfare Act

Congress passed an amendment to the Animal Welfare Act in 1976 to crack down on dogfighting and cockfighting, addressing animal fighting for the first time in federal law. Section 26, as adopted as part of a larger set of amendments to the AWA, restricted the interstate transport of dogs and roosters for fighting, albeit with a major loophole relating to cockfighting. In the subsequent quarter century (1976-2001), there was not a single federal enforcement action against cockfighting or dogfighting. That started to change in 2002, when Congress upgraded the law and eliminated major loopholes. Including that amendment, Section 26 has been upgraded 5 times since 2002, including on the Farm bills in 2002, 2008, 2014, and 2018. As of December 2019, the law bans animal fighting everywhere in the United States.

Read/download summary of provisions of Section 26

During consideration of a bill in 1976 to amend the Animal Welfare Act to deal with the inhumane treatment of animals in transportation, there were legislative maneuvers to include an animal fighting provision, with the primary concerns related to cockfighting. After a contentious debate, with Rep. John Krebs, D-Calif., pushing for an anti-cockfighting provision, the House passed an amendment to ban any interstate transport of “dogs or live birds” for fighting by a wide margin (289-78). When the entire bill came up for final passage in the House, including the interstate ban on fighting dogs and birds, it passed by an event wider margin: 335-34. (Congressional Record at 2884-5, Feb. 9, 1976). The Senate did not include any provision on animal fighting in its bill dealing with inhumane transportation of animals. A House-Senate conference committee resolved the differences by retaining an anti-animal fighting section of the AWA, but it weakened the anti-cockfighting provision, determining that the federal government would not restrict cockfighting in any state where the practice was legal, nor would it restrict shipment to any state, territory, or foreign country with legal cockfighting.

Congressmen Earl Blumenauer, D-Oregon, and Tom Tancredo, R-Colo., offered a measure to close the cockfighting loophole and ban any interstate transport of fighting animals as an amendment to the Farm bill. Their amendment was defeated on a voice vote after the Agriculture Committee chairman Larry Combest, R-Texas, and ranking member Charlie Stenholm, D-Texas, spoke against it. (Congressional Record, Oct. 4, 2001, pp. H6274-76). Blumenauer requested a roll call vote. Combest and Stenholm recognized that a recorded vote would expose those who supported cockfighting. Combest and Stenholm allowed an unusual procedure, calling for a re-do of the voice vote. A new voice vote was called for, and this time, the presiding officer determined that the “aye” votes prevailed. Blumenauer then pressed ahead, offering a second amendment to ban any imports or exports of fighting birds, knowing that American cockfighters were at the center of a robust global trade in fighting birds and shipping tens of thousands of birds to other nations. His amendment also made violations of the federal anti-animal fighting law a felony. (Congressional Record, Oct. 4, 2001, p. H6274) That amendment passed by a voice vote on the first try. On the Senate side, Senators Wayne Allard, R-Colo., and Tom Harkin, D-Ia., had an easier time. They successfully urged the chairman of the committee, Richard Lugar, R-Ind., to include the measure in his version of the Farm bill, and it included the identical language that had been passed by the House. Surprisingly, the conference committee then stripped the felony provisions (normally, matters not in dispute are not discussed or altered). President Bush signed the Farm bill into law in May 2002. Even with the weakening action in the conference committee, it represented a dramatic upgrade in the law designed to remedy a quarter century of legislative and enforcement inaction.

•   The House Agriculture Committee conducted hearings on H.R. 1275 in 2000. S. House of Representatives. Committee on Agriculture. Prohibition of interstate movement of live birds for animal fighting: hearing before the 106th Congress on H.R. 1275. September 13, 2000.

During consideration of the 2004 Agriculture spending bill, Rep. Blumenauer pushed an amendment to secure $800,000 in funding for enforcement of the recently upgraded law against dogfighting and cockfighting. Even with Rep. Combest and Rep. Stenholm opposing it, along with the chairman of the agriculture appropriations committee, it passed by a vote of 222-179. (Roll call vote #355). That provision was accepted in the final spending bill passed by the House and Senate and signed by the President.

A group of lawmakers, led by Elton Gallegly, R-Calif., and Earl Blumenauer in the House and Maria Cantwell, D-Wash., and John Ensign, R-Nev. in the Senate, introduced and advanced the Animal Fighting Prohibition Enforcement Act in 2007 as a free-standing bill.  The bill provided up to 3 years in prison and $100,000 fines for violations and outlawed the sale of cockfighting weapons. The House passed the bill 368-39 (Roll Call #188). The Senate passed it soon thereafter by Unanimous Consent (no roll call vote required). President Bush signed it into law as Public Law 110-22.

The debate over that provisions of law enacted in 2007 was preceded by the following committee reports and hearings in 2006-07.

In 2011, Reps. Tom Marino and Betty Sutton, and Senators Richard Blumenthal, Mark Kirk, R-Illinois, Maria Cantwell, and David Vitter, R-La., introduced companion measures to make it a crime to attend an animal fight or to bring a minor to one, to bring the entire cast of characters involved in these spectacles to justice. In 2012, Senator Vitter offered an amendment to a bill dealing with the use of animals in movie production, to crack down on attendance at animal fights. It passed (Roll Call #154), but the provision was stricken in a conference committee. The next year, during consideration of the Farm bill, the Senate Agriculture Committee (influenced by the lopsided outcome on the Vitter amendment) inserted the provision into its version of the Farm bill. In the House, Rep. Jim McGovern, D-Mass., introduced an amendment to the Farm bill in committee to add this provision, and it passed 28 to 17 despite opposition from Agriculture Committee Chair Frank Lucas, R-Okla., and his allies. President Obama signed the farm bill into law in 2014, with the anti-spectator provision intact.

Reps. Peter Roskam, R-Illinois, and Earl Blumenauer advanced an amendment in 2018 to the Farm bill to apply all the federal prohibitions against animal fighting to every part of the United States, including the U.S. territories (American Samoa, Guam, the Northern Marianas Islands, Puerto Rico, and the Virgin Islands). Their amendment passed by a vote of 359-51. (Roll Call #202) A group of Senators, led by Senators Cory Booker, R-N.J., Ron Wyden, D-Oregon, Susan Collins, R-Maine, Richard Blumenthal, D-Conn., pushed for a similar amendment in the Senate. While they were unable to secure a vote on their amendment, they worked with their House colleagues and secured the provision in the final Farm bill, albeit with a one-year delay in its effective date.

There have been three statewide ballot initiatives to ban cockfighting. Voters approved each of them. The other 47 state bans on cockfighting came through actions of state legislators.

was on the November 3, 1998 election ballot in Arizona as an initiated state statute. It was approved.  The measure made cockfighting a Class 5 felony for knowingly owning, possessing, keeping or training a cock for cockfighting; cause any cock to fight or injure another cock for amusement or gain, or allowing cockfighting on a person's property; make it a Class 1 misdemeanor for being present at a cockfight.

was on the November 3, 1998 ballot in Missouri as an initiated state statute, where it was approved. The measure made it a class D felony to bait or fight animals, permit such activities on premises you control, or promote, conduct, stage, advertise or collect fees for such activities. The measure also made it a class A misdemeanor to knowingly attend baiting or fighting of animals, knowingly sell, offer for sale or transport animals for such purposes or to engage in behaviors related to cockfighting and bear wrestling.

was on the November 5, 2002 ballot in Oklahoma as an initiated state statute, where it was approved with 56.2 percent voting "yes" and 43.8 percent voting "no.. The measure made it illegal to hold or encourage a cockfight, to be a spectator at a cockfight and to keep birds for fighting purposes. By approving this measure, Oklahoma became the 48th state in the nation to ban cockfighting. Also in that election, voters handily rejected State Question 698, a measure referred to the ballot by the Legislature that would have nearly doubled the number of signatures needed to qualify any animal welfare initiative for the ballot. SQ 698 would have made it nearly impossible to put an anti-cockfighting measure on the ballot if SQ 687 had been defeated. Governor Frank Keating spoke out in the strongest terms in favor SQ 687 and against SQ 698, as did the state's two largest newspapers, the Tulsa World and the Daily Oklahoman. Attorney General Drew Edmondson was instrumental in defending the petition in its qualification phase and from a state constitutional challenge. The Oklahoma Supreme Court upheld the measure in a unanimous judgment.

A key portion of the Animal Welfare Act (AWA) has weathered multiple legal challenges from cockfighters and dogfighters who argued that the federal government lacks the authority to restrict animal fighting. Each of the five amendments to Section 26 of the AWA (relating to “animal fighting ventures”) from 2002 to 2018 triggered legal maneuvers by cockfighting enthusiasts intent on continuing their illegal enterprises. Many of the lawsuits had common arguments, challenging Congress’s authority to enact animal fighting bans and alleging infringement of constitutional rights.